So there is more good news to share today. I weighed in at 205! This is the lowest I have ever been and way excited to report it. Is there a reason for why I lost another 2 pounds. Well I think there is and it has to do with what I thought was a mistake.

It started last night after my blog. In yesterdays blog, I stated that I was still hungry and might eat again. Well that was an understatement. I ate another plate of salad, three more somewhat small slices of pizza (gluten free), and some dark chocolate. It was a lot of food. They were good choices for the most part but it was a lot of food. I was seriously hungry. And that was the main thing. I was hungry. I did not stuff myself but I did get full–finally.

So the next day I fasted up until my workout. I did my usual 4 mile run. My run was not a great success. I did make the whole 4 miles in under 40 minutes, I had to take a break at the 2 mile mark. I waked and ran another quarter mile. Then being very upset with myself, I ran the remainder. This is what I looked like afterword.

I was really sweaty.

After this I did a HIIT workout. Some stuff on the latter, some jump-rope, and stepper exercises. My legs were killing me.

Now it was time to face the music. I had done everything I could do. I had to get on the scale. I was not expecting it to be too bad but I did expect to gain weight. But I did not. In fact, I was down a pound and a half to two pounds. The number actually hit 204.5 and flickered up to 205. I was elated.

Before I broke my fast I took another picture in my goal shirt. So I’m down six pounds and here are the two pictures side by side. The one on the left is from today. 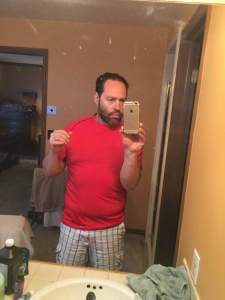 After dinner I did another workout because I am planning on having a high-carb day tomorrow in the afternoon. So I walked for 15 minutes and did a bit of a shoulder workout. Tomorrow is also a rest day. I really do not like rest days.